The virtual design prototypes of GreenQuays project are available! These prototypes share design knowledge on the creation of cooler urban water environments, in such ways that this it can be applied not only to the adjacent spaces of the Mark river, but similar water bodies elsewhere. The ambition of the GreenQuays virtual design prototypes is to work as a substantial contribute to assist design professionals in undertaking the climate adaptation of urban areas. This is a crucial contribute to the replicability of GreenQuays to other cities.

The prototypes were developed for four representative locations along the river Mark (Figure 2), so that the design measures could be applied to the whole site while, however, keeping information short and concise. The four locations constituted four types of urban settings / prototypes: wide quays, narrow quays, squares and crossroads. Although departing from this specific site, the prototypes have an abstract character. The spatial characteristics they comprise can be found at other points of the river Mark and elsewhere (Figure 3).

In line with the climate-responsive design strategy, the prototypes comprise several design measures distributed over four specific design intervention types: (1) shading and ventilation, (2) long-wave radiation and water infiltration, (3) water vaporisation, and (4) accessibility to water. The design measures indicated were shown throughout the RTD to induce to effective (direct and indirect) cooling effects.

The contents were prepared to hold scientific accuracy while being tangible to a majority out of the climate-responsive field of expertise. To this end, professional jargon was avoided; simple, short and straightforward sentences were used.

The prototypes are 3D axonometric views upon which the selected design measures are indicated. The 3D views were built with the site in mind but were not meant to represent it. The prototypes are representative abstracted urban environments that comprise design principles suitable for use in different locations and assignments.

The design measures were indicated over specific yet indicative points within the 3D views. These points offer an illustration of what the design measures refers to, in order to facilitate their communication and comprehension. The design measures comprised in the prototypes are not meant to be deterministic. The precise location for the application of measures must be addressed by a design team for a specific location.

Next to each design measure the expected microclimatic effects for both summer and winter are indicated. This is meant to inform about the ways in which the design measures can improve an urban water environment throughout the year. Winter effects are not indicated when negligible or inexistent.

The design measures have a colour code associated. Each colour refers to each of the climate-responsive strategies employed This code is to facilitate the understanding of which specific design intervention type does each design measure comply with: dark blue for shading and ventilation; green for long-wave radiation and water infiltration; light green for water vaporisation; and grey for accessibility to water.

Furthermore, the design measures are ranked according to their potential in leading to cooling effects. This was made through “+” symbol where: “+++” indicates the most significant effects; “++” indicates significant effects; and “+” positive yet less significant effects. Measures without any indication in this regard should be understood as having no microclimatic effect but still contributing to the positive experience of the urban water environment. This coding attributes a hierarchy to the design measures. This aims at assisting designers with establishing priorities when needed.

Research. The GreenQuays prototypes constitute a product from previous research on the cooling effects of small urban water bodies. To that extent, the prototypes can also be seen as the starting point for further research on the topic. For example, research on other types of urban spaces, which can bring new insights to the biometeorological effects observed in the research conducted for GreenQuays. New design measures may be added, others refined or revised according to the results of new investigations on the topic.

Training. The GreenQuays prototypes may be useful for workshops / training sessions within public and private organisations, such as municipalities, around, for instance, climate adaptation, urban resilience, climate-responsive urban design or sustainable development.

Likewise, the GreenQuays prototypes can also have positive contributes beyond the climate-responsive field of expertise:

Urban ecosystems and biodiversity. The prototypes comprise design guidelines, such as the increase of greenery, that can benefit enhance the conditions for flora and fauna to settle and flourish, or to improve the urban water cycle. This was precisely one of the activities within the GreenQuays project: the coupling between climate-adaptiveness and urban biodiversity and ecosystems.

Recreation. The GreenQuays prototypes assign a thermal role to urban water bodies, which has the potential to reinvent the common relationship established between people and water. 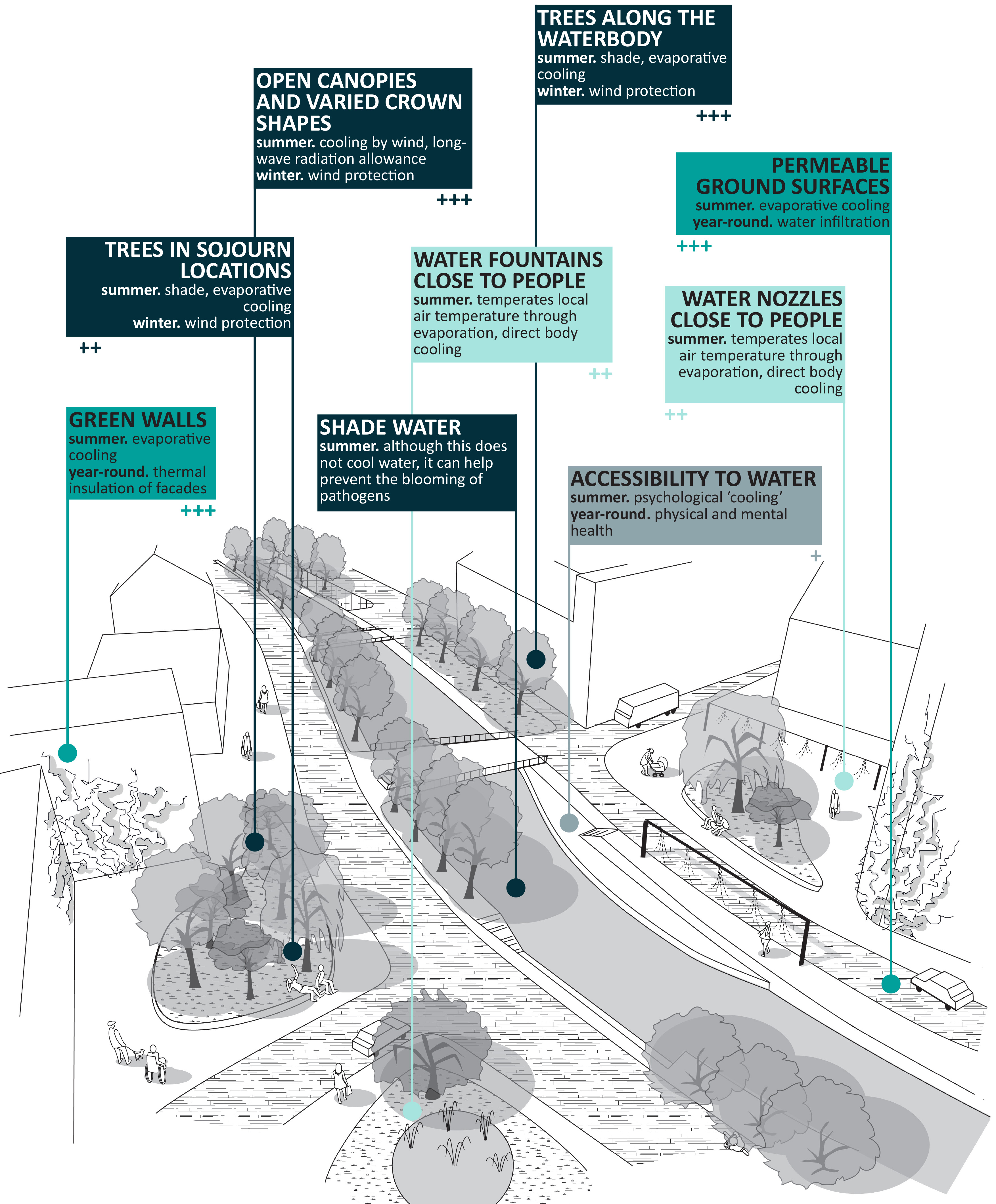